Asia Desk is a small family operated business, we do not have the resources to work with every hotel in each of our destinations, so we choose a handful based on location, service and history. We pride ourselves in knowing the management in each of these places just in case we need anything above and beyond. Our two favorite recommendations are from the capital cities of Thailand and Vietnam. The Mandarin Oriental Bangkok and the Sofitel Legend Metropole Hanoi are not only architecturally iconic but also stitched into the histories of both countries. They are managed by top notch hotel management companies, Mandarin Oriental Hotel Group and Accor, who have also incorporated these hotels into their brand identity.

The Mandarin Oriental Bangkok always reminds me of my childhood, my parents would take me there on the weekends to have brunch and I can remember having to get dressed up so that I could walk through the lobby. The initial structure was built in 1876 as the first hotel in Thailand and is located on the banks of the Chao Phraya River which was the cities’ main transportation artery. Originally known as the Oriental Hotel, it was owned and managed by a group of Danish businessmen hosting distinguished guests such as Tsar Nicholas in 1891. It also served as a Japanese Army Officers club during World War 2 and eventually fell into the ownership of Jim Thompson, the Thai Silk Magnate who mysteriously disappeared further adding to the role the Oriental played in Thai history. 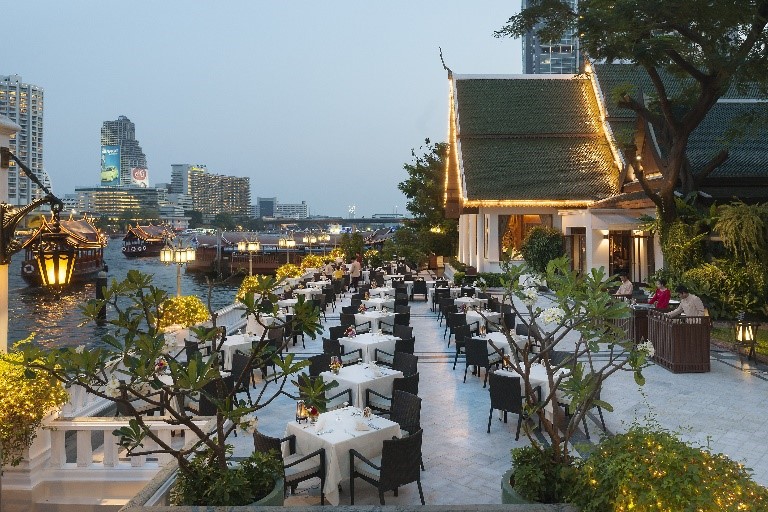 My last tidbit of history on this is when the Mandarin Hotel Group, famous for the Mandarin Hotel in Hong Kong another iconic property, took over management of the Oriental, they rebranded the entire company to Mandarin Oriental Hotel Group due to the brand value the hotel had worldwide. That being said, you are not going to be staying in a museum, the hotel is undergoing a complete renovation as we speak and will relaunch in Q4 of 2019. We always recommend staying in the River View Wing so you have a front row to where all the action takes place and for those who are looking to splurge, the Ambassador Suite is the top choice. In addition to staying, eating here is also a must, Le Normandie, the signature French Restaurant has two Michelin Stars, while my childhood favorite Sala Rim Naam has great outdoor seating with Thai food overlooking the river of kings.

In stark contrast to the to the bustling capital of Bangkok, Hanoi is a much quieter town with a very colorful colonial past. The Sofitel Legend Metropole is embedded in this past, openined in 1901 by two French entrepreneurs André Ducamp and Gustave-Émile Dumoutier. During the colonial period the hotel welcomed visiting dignitaries and even Charlie Chaplin during his honeymoon with actress Paulette Goddard in 1936. In the 60’s a bomb shelter was built to shield guests from US bombs housing Jane Fonda and singer Joan Baez, who recorded her song Where Are You Now in which sounds from the Christmas bombings can be heard in the background. The hotel began restoration in 1987 and was completely rebuilt in 1992, the bomb shelter was discovered in 2011 and a tour can be had in the evenings for everyone staying there. The hotel has since hosted George HW Bush and was also the meeting place for the US – North Korea summit. Accor has also launched their Sofitel Legend Collection based on this iconic property to further their own brand.

Aside from the storied history, there is another coincidence that gives Metropole yet another star in our book. My wife went to hotel school in Holland and the now General Manager was actually her first boss at the Sofitel Bangkok before moving on to his current post. We definitely recommend you stay in the Historical wing in Grand Luxury Rooms or the Charlie Chaplin Suite if you really want something nice. The Opera Wing is also lovely, but nothing like staying in the original. The location in the old French Quarter is unbeatable, you are next to Hoàn Kiếm Lake where the late John McCain was shot down during the Vietnam War, and on the weekends,  you can easily get to the walking street.

“Much have I traveled in the realms of gold, and many goodly states and kingdoms seen.”